War has been raging in eastern Ukraine since 2014. But the situation escalates more and more, since Putin has extended his war of aggression to the whole country,. Our thoughts and solidarity are with the people in Ukraine. Those people who have fled this war, who are still fleeing or those who remain in the country because they cannot or do not want to flee. It is incredible and so important how much solidarity is lived in dealing with people who have fled Ukraine.

Yet we also notice a stale aftertaste because much of the happenings in the EU right now should be self-evident. There must be safe and legal ways to enter the EU. People fleeing should be able to travel by train to their destination for free. They should be offered sleeping facilities and care. They should be given the right to and the opportunity for a fair asylum procedure with long-term prospects of staying. The fact, that this does not apply to everyone, despite the seemingly boundless solidarity with Ukrainian refugees, is hard to bear.

All these self-evident things should also apply to people without Ukrainian or EU passports. Moreover, it should apply to BiPOC who flee from Ukraine and experience so much racist violence at the EU borders. In addition, these things should apply for all other people fleeing to the EU who are prevented from entering by fences, violence and illegal push-backs.

Reasons for this unequal treatment can be found in news coverage and unfortunately in speeches at demonstrations against the war in Ukraine. Ukrainian refugees are repeatedly portrayed as “different” from other refugees. Words like “civilized” are used, which clearly mark a hierarchy to other refugees. It is explicitly stated that white European compassion is greater because Ukrainian people are white. A particularly paradoxical argumentation, because meanwhile violence against Russian and German-Russian people is increasing strongly. They are blamed personally for Putin’s war and it is not recognized that thousands of Russians are protesting against this war every day at the risk of their physical integrity.

In addition to this injustice, the war in Ukraine itself is sometimes misrepresented or distorted as if it suddenly started out of nowhere last week. Yet, war has been going on in eastern Ukraine for 8 years which must not be made invisible. Russia’s aggression has been present for a long time and has been common knowledge at least since the annexation of Crimea. At the same time, this war is not the first war in Europe since World War 2. This often used expression completely ignores the wars waged in the former Yugoslavia as well as the genocide against the Bosniaks in Srebenica in the 1990s. In these times, a comparable wave of solidarity in Western Europe failed to materialize.

The exemplary actions in support of Ukrainian refugees must finally apply to all refugees from Ukraine and to all other refugees as well. Additionally, the white European sympathy for the fate of the people in Ukraine must extend to all people fleeing war and political persecution. So that #AllRefugeesWelcome does not remain just a hashtag and finally all are really equally welcome. #StandWithUkraine

Resources and further reading (in German):

Why do we need the working group prevention? No means no! The WG Prevention of Sexualized Violence has been in existence for almost a year now. We would like to keep you up to date Read more… 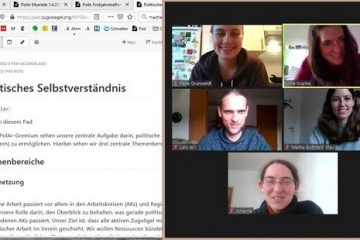 Self-image of the committee for political work

A new political self-image The committee for political work was founded in 2017 as a result of the internal processesaround the political role of the association. With the introduction of the committee structure, twoparallel bodies Read more…

We are looking for an employee as soon as possible in the area: ADMINISTRATION – INTERNATIONAL VOLUNTARY SERVICE (INCOMING) Official recruitment: ZV_Office_Recruitment_011221